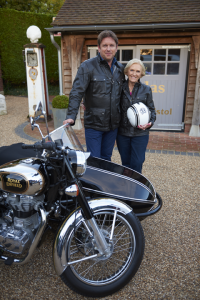 Mary Berry is the latest in a long line of celebrities to take to the road in a Watsonian sidecar.

The star of The Great British Bake Off was taken for a spin by TV chef and keen motorcyclist James Martin, who she’ll be joining for his forthcoming television series on Food Network.

Watsonian have been building sidecars in the Heart of England since 1912 and their products frequently feature on film & television, including Harry Potter and the Deathly Hallows, Britain’s Got Talent, Two Fat Ladies, BBC Springwatch and Penelope Keith’s Hidden Villages.,

The outfit pictured is a Royal Enfield Classic Chrome 500, paired with a Watsonian GP Manx sidecar.

Watsonian will be showing their 2017 range of sidecars at Motorcycle Live between 19th-27th November.